On April 12th, Jose Reyes sprained his ankle while sliding into second base on a stolen base attempt in Kansas City. Reyes was supposed to return in mid-July but made a quick return after some brief rehabbing in the minors.

Reyes started his rehab by playing a simulated game on Friday, June 14. Then he started for Class High-A Dunedin on that Monday. He played 3 games at that level, batting .417 with 5 hits, all singles, in 12 at-bats. On Friday, he advanced to AAA Buffalo where I was able to see him play. He batted .412 with 7 hits and 1 double in 17 at-bats. I was able to attend 3 of the 4 games Reyes was in Buffalo. I saw him play on Friday, Sunday, and Monday. I would have gone on Saturday, but it was Star Wars Night at Coca Cola Field so I decided not to go because this is one of their more popular promotions. In fact, all 18,025 of Coca Cola Field’s seats were filled that day. Anyway, I obtained 27 balls in those 3 games and I was able to get Jose Reyes’s autograph 4 times. I got one of his foul balls on Sunday so I was able to get that signed in the players’ parking lot after the game. Then, on Monday, I got Jose to sign in the players’ parking lot again. This time, I got him to sign 3 different items! Once on an overpriced Major League ball, once on a 2006 Topps card, and another on a brand new Blue Jays hat. Reyes was very friendly and signed for anyone that asked. He is truly a class act.

Back to his playing, Jose played his first game back on Wednesday in Tampa Bay, and went 0-4. Then, he went 0-2 in Boston yesterday. Hopefully, he’ll pick up again soon.

My name is Danny. I am one of the top Minor League ballhawks in North America. In fact, I recently won the 2012 Minor League Junior Ballhawk of the Year on mygameballs.com. (http://mygameballs.com/home?action=showarticle&article_id=267) In this past year alone, I obtained 187 balls at Minor League games. The main stadium I ballhawk at is Coca-Cola Field in Buffalo, NY. This beautiful ballpark is home to the Toronto Blue Jays’ triple-a affiliate, the Buffalo Bisons. Although, I will occasionally attend games at Dwyer Stadium in Batavia, NY, home of the Batavia Muckdogs and at Frontier Field in Rochester, NY, home of the Rochester Red Wings.

You may recognize me from nybisons.mlblogs.com, where I blogged for over a year before I started this blog. The blog gained a lot of popularity and even got into the top 5 on the Latest Leaders list on MLB.com Blogs Central. I blogged with fellow Buffalo area ballhawks Austin and Quinn. Between us, we snagged a total of 919 baseballs at MiLB games this year. I attend many of my games with them and you will see their names mentioned when I blog about the games I went to.

I am a fan of any level of proffesional baseball. I’d have to say that I love Minor Leagues the most though. Maybe because it’s the level of play I watch the most, but I just love how fans can get closer to the players and see future all-stars before they make it big. 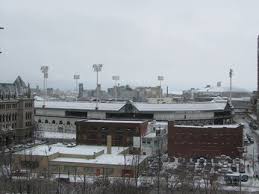 My name is Danny. I frequently ballhawk at Coca-Cola Field in Buffalo, NY which is pictured above. My blog will be about the Blue Jays’ farm system (specifically the Buffalo Bisons) and my major and minor league ballhawking adventures.
-Danny